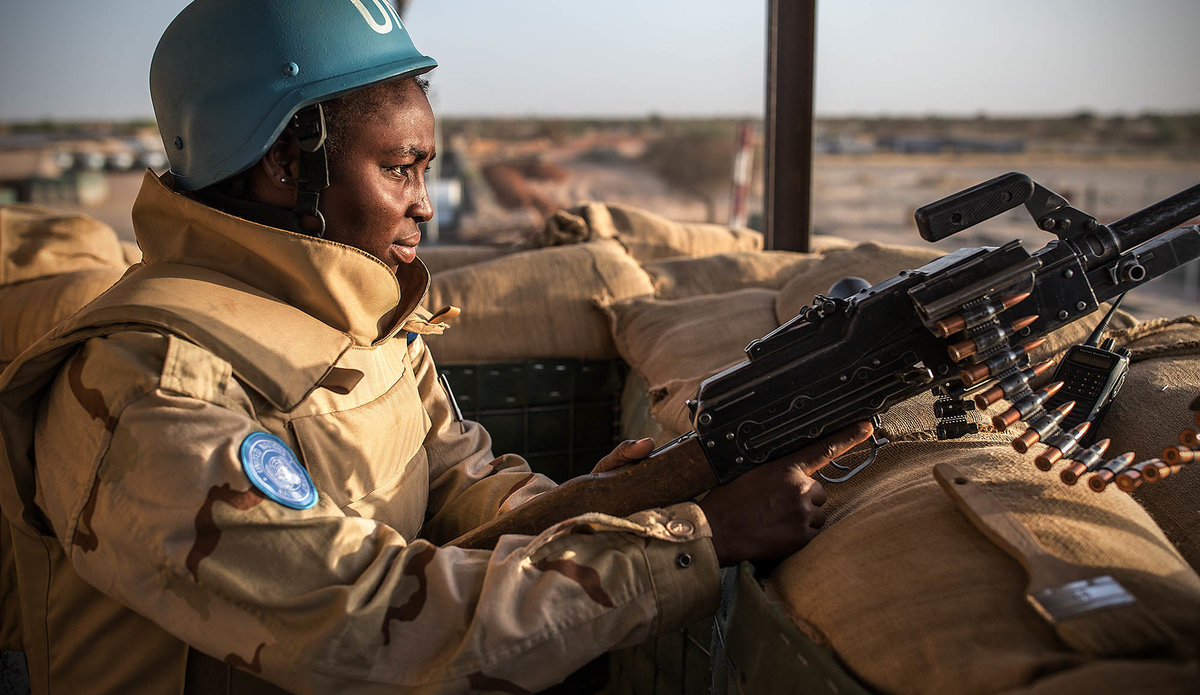 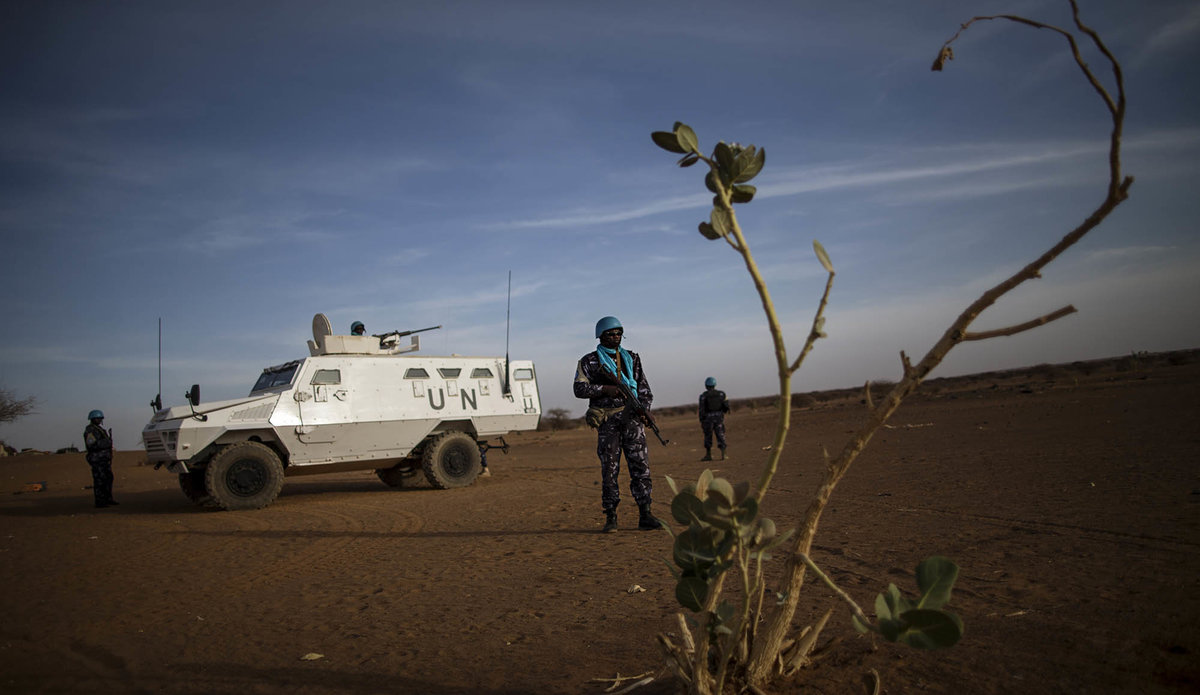 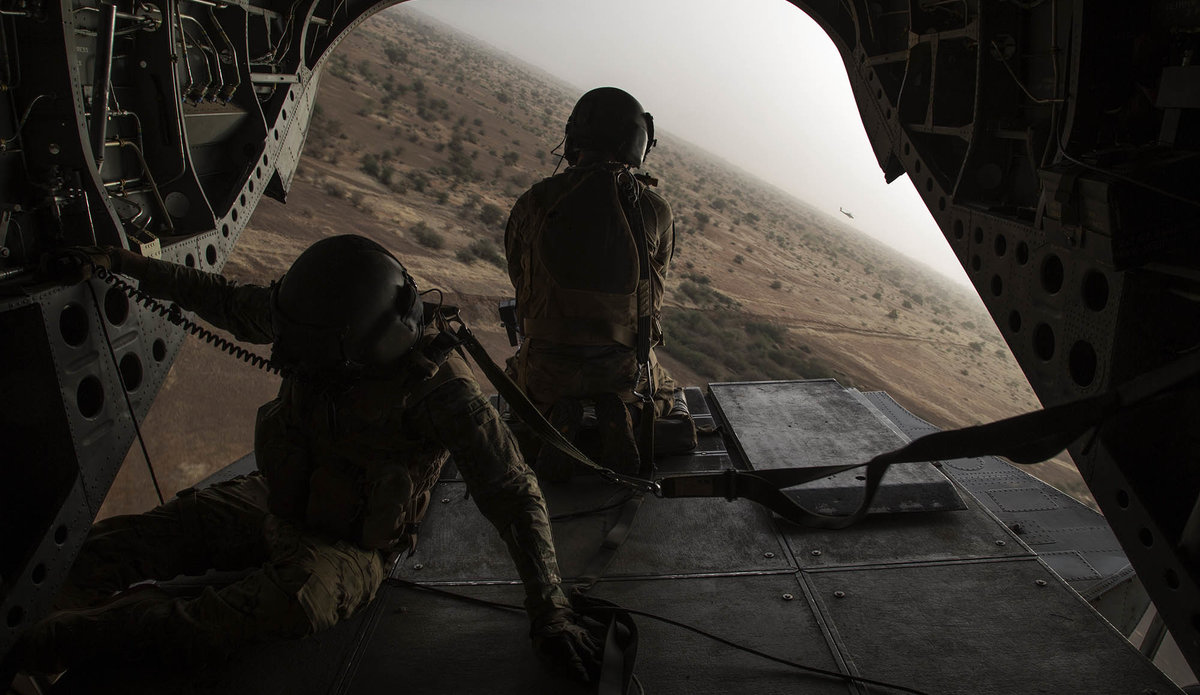 Under the terms of the resolution, the mission would support the political process and carry out a number of security-related stabilization tasks, with a focus on major population centres and lines of communication, protecting civilians, human rights monitoring, the creation of conditions for the provision of humanitarian assistance and the return of displaced persons, the extension of State authority and the preparation of free, inclusive and peaceful elections.

The Mission would operate under robust rules of engagement with a mandate to use all necessary means to address threats to the implementation of its mandate, which would include protection of civilians under imminent threat of physical violence and protection of United Nations personnel from residual threats, within its capabilities and its areas of deployment. This could include the conduct of operations on its own or in cooperation with the Malian defence and security forces. French forces deployed in Mali were also authorized to intervene in support of MINUSMA when under imminent and serious threat upon request of the Secretary-General.

The United Nations Office in Mali (UNOM), established earlier in accordance with Security Council resolution 2085 of 20 December 2012, would be subsumed into MINUSMA immediately following the adoption ofresolution 2100. On 1 July 2013, MINUSMA would take over the authority from the African-led International Support Mission in Mali (AFISMA), subject to further review by the Council of the security situation in Mission’s area of operations. MINUSMA would comprise up to 11,200 military personnel, including reserve battalions capable of deploying rapidly within the country as and when required, and 1,440 police (comprising formed police units and individual police officers).

It is envisaged that the majority of the military, police and civilian substantive and support components would operate primarily in the north with a possible logistics base in Gao or Sevare, while a light presence, including civilians, military and police elements would be based in Bamako.

In recent years, Mali has been confronted by a profound crisis with serious political, security, socio-economic, humanitarian and human rights consequences. The crisis stems from long-standing structural conditions such as weak State institutions; ineffective governance; fragile social cohesion; deep-seated feelings among communities in the north of being neglected, marginalized and unfairly treated by the central Government; a weak and externally dependent, albeit vibrant, civil society; and the effects of environmental degradation, climate change and economic shocks. These conditions were exacerbated by more recent factors of instability, including corruption, nepotism, abuse of power, internal strife and deteriorating capacity of the national army.

In mid-January 2012, a Tuareg movement known as the Mouvement national pour la libération de l’Azawad (MNLA), along with Islamic armed groups including Ansar Dine, Al-Qaida in the Islamic Maghreb (AQIM) and the Mouvement pour l’unicité et le jihad en Afrique de l’Ouest (MUJAO), in addition to deserters from the Malian armed forces, initiated a series of attacks against Government forces in the north of the country. The Tuareg rebellion was emboldened by the presence of well-equipped combatants returning from Libya in the wake of the fall of the regime there.

On 22 March, a mutiny by disaffected soldiers from the units defeated by the armed groups in the north resulted in a military coup d’état. A military junta, the Comité national pour le redressement de la démocratie et la restauration de l’Etat, led by Captain Amadou Sanogo, took power, suspended the Constitution and dissolved the Government institutions. The coup accelerated the collapse of the State in the north, allowing MNLA to easily overrun Government forces in the regions of Kidal, Gao and Timbuktu and proclaim an independent State of Azawad on 6 April. Shortly thereafter, tensions emerged among the armed groups in the north and, by 18 November, Ansar Dine and MUJAO had driven MNLA out of the main towns of Gao, Timbuktu and Kidal.

Immediately after the coup, on 27 March, the Heads of State and Government of the Economic Community of West African States (ECOWAS) appointed the President of Burkina Faso, Blaise Compaoré, to mediate in the crisis. On 6 April, the military junta and ECOWAS signed a framework agreement that led to the resignation of the then President, Amadou Toumani Touré, on 8 April and the appointment of the Speaker of the National Assembly, Dioncounda Traoré, as interim President on 12 April. The agreement provided for the establishment of a transitional Government, headed by a prime minister with executive powers. On 17 April, Cheick Modibo Diarra was appointed interim Prime Minister. On 20 August, the Prime Minister announced the formation of a Government of national unity.

Establishment of UNOM and AFISMA

Following the coup d’état, UN Secretary-General’s Special Representative for West Africa, Said Djinnit, offered the support of the United Nations to the Malian authorities. As a result, the Mali interim authorities requested United Nations assistance to build the capacity of the Malian transitional authorities in the areas of political negotiation, elections, governance, security sector reform and humanitarian assistance.

Further consultations led to the deployment in mid-January 2013 of the United Nations Missions in Mali – a multidisciplinary United Nations presence which was authorized by Security Council resolution 2085 of 20 December 2012 in order to provide coordinated and coherent support to (i) the on-going political process and (ii) the security process, including support to the planning, deployment and operations of the African-led International Support Mission in Mali.

The security situation in Mali underwent a serious deterioration in early January 2013, when elements of Ansar Dine and the Movement for Unity and Jihad in West Africa, with the support of Al-Qaida in the Islamic Maghreb, advanced southwards. They clashed with the Malian army north of the town of Konna, some 680 kilometres from Bamako, forcing the soldiers to withdraw. Terrorist and other armed elements also advanced in the west, taking control of the town of Diabaly on 14 January.

The capture of Konna by extremist groups led the Malian transitional authorities to request the assistance of France to defend Mali’s sovereignty and restore its territorial integrity. In response, military operations against terrorist and associated elements were initiated on 11 January under “Operation Serval”, led by France, in support of the Malian defence and security forces. The deployment of AFISMA was accelerated following the military intervention, allowing some of the contingents to move into different parts of northern Mali in February.

As a result of the French and African military operations alongside the Malian army in northern areas, the security situation in Mali significantly improved. By the end of January, State control had been restored in most major northern towns, such as Diabaly, Douentza, Gao, Konna and Timbuktu. Most terrorist and associated forces withdrew northwards into the Adrar des Ifoghas mountains while others, mainly local Malians, reportedly blended into local communities.

Despite these gains, serious security challenges remained, including continued terrorist activities and military operations in some areas. The need to restore the integrity of Mali’s territory and ensure the physical security of communities in the north continued to be a central priority. Even when full territorial integrity is regained, many serious security risks will remain, including terrorist attacks, weapons proliferation, drug smuggling and other related criminal activities, which are likely to continue to undermine governance and development in Mali for the foreseeable future.

The most significant development in the political process during the first three months of 2013 was the adoption of a road map for the transition, which was unanimously approved by Parliament on 29 January. The road map highlighted two essential missions for the transitional Government: the restoration of territorial integrity and the organization of free and fair elections. The road map provided for further military operations alongside Operation Serval and AFISMA, aimed at recovering the areas occupied by armed groups and restoring the country’s territorial integrity; the full re-establishment of State authority in the north; the reform of the armed forces; dialogue with groups who renounce military struggle and adhere to the unitary nature of the Malian State and its Constitution; the return of refugees and displaced persons; inter-communal dialogue; and the fight against impunity.

The road map also outlined commitments in three areas related to the organization of elections, namely: reforming the legal and institutional framework; finalizing the revision of the voters’ list; and setting an electoral calendar, which envisaged legislative and presidential elections before the end of July 2013.

Further to the letter to the Secretary-General from the interim President of Mali, in which the transformation of AFISMA into a United Nations stabilization and peacekeeping operation was envisaged, and the corresponding letter from the President of the Security Council, UN Assistant Secretary-General for Peacekeeping Operations, Edmond Mulet, visited Mali from 10 to 16 March, together with a multidisciplinary delegation, to develop recommendations for the Council’s consideration on options for establishing a United Nations peacekeeping operation in Mali.

On the basis of this mission’s findings, the UN Secretary-General presented to the Security Council a report, outlining options for the establishment of the UN peacekeeping operation in Mali.